Victoria's Secret Angel Miranda Kerr has revealed she felt insecure about returning to the catwalk after giving birth to son Flynn. 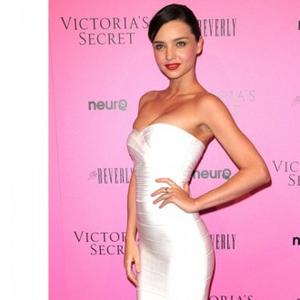 Miranda Kerr "felt a little nervous" about returning to the catwalk.

The Victoria's Secret Angel admitted she had insecurities about going back to the runway after giving birth to her and husband Orlando Bloom's son, Flynn, four months ago, but overcame her initial fears to star in a Paris fashion show.

She said: "I felt a little nervous. I hadn't been in high heels for a while. It was probably a good five months since I'd worn heels, but it was kind of like riding a bicycle."

Miranda's body has naturally changed slightly since giving birth, but she is pleased with her shapelier look.

She added: "My hips are wider, and my boobs are obviously bigger. I feel like I've become more of a woman now, and I'm really embracing those curves."

The 28-year-old beauty has been pictured in some small bikinis since having Flynn, and the brunette beauty revealed she is at her most comfortable in her underwear.

Miranda explained to people.com: "People have come to the house and I'm just in my knickers. [But] I feel like it's more appropriate to have knickers on than being completely naked."