Miranda Kerr has given Jennifer Aniston custom-made lingerie ahead of her wedding to Justin Theroux and the actress can't wait to wear the sexy underwear. 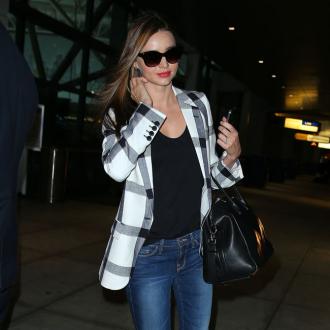 Miranda Kerr has given Jennifer Aniston custom-made lingerie ahead of her wedding to Justin Theroux.

The Australian model - who has two-year-old son Flynn with husband Orlando Bloom - recently quit her role as a Victoria's Secret Angel but is keen to start her own underwear line, so set the actress a box of her ideas.

A source said: ''It's hand-stitched, one-of-a-kind! It's virginal white, sexy yet classy, too - and absolutely beautiful.''

Jennifer has already given her close pals a sneak preview and she can't wait to wear the lingerie on her wedding night.

The source added to America's OK! magazine: ''Everyone said she looked beautiful. Jen loves it so much that she's going to wear it on her wedding night!''

The former 'Friends' actress was so moved by Miranda's gesture that she wants to get to know her better.

The insider said: ''Now Jen's decided to make a big push to get to know Miranda better. So Jen has decided to invite her over for a yoga session at her house.''