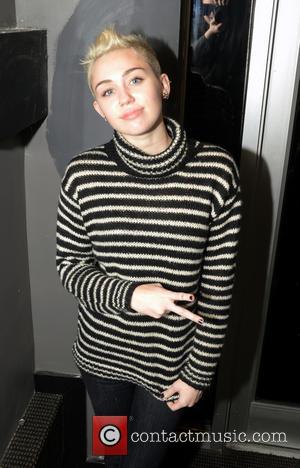 Err, Miley Cyrus celebrated her 20th birthday party in pretty unconventional style last month. Though we heard little about the bash at the time, TMZ.com has since obtained photographs of the party that show the former Hannah Montana star's true wild side.

In one of the shots, Cyrus is seen with her freshly cropped hairstyle grasping the exposed butt-cheeks of a stripper! It's certainly a far cry from Miley's squeaky clean Disney days, though it's pretty unsurprising these days. During Sunday's VH1 Divas concert, Cyrus kept grabbing her crotch while performing a cover of Billy Idol's Rebel Yell. That performance came eight days after she performed at the Christmas Creampies concert in Hollywood wearing a cleavage-revealing top and sharing the stage with a topless exotic dancer. She recently made a sultry guest appearance on Two and Half Men, and chopped her hair off before bleaching it blonde. All this appears tame compared to the party she threw for Liam Hemsworth in January, posing provocatively with a phallic shaped celebration cake.

Before her party last month, she tweeted, ""If I don't get at least one big booty hoe my friends are officially not my friends anymore."