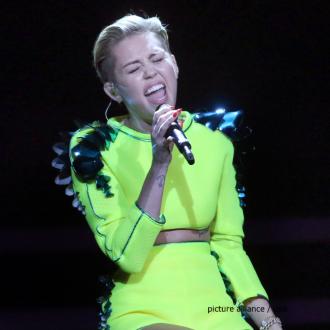 The controversial singer is set to show off her twerking skills once again when she takes to the stage to perform at the annual ball drop event in Times Square, New York City this New Year's Eve (31.12.12).

The 21-year-old star alerted her fans to the news on Twitter, writing: ''Smilers! There's been a change in my NYE plans @RyanSeacrest asked me to perform in Times Square for #RockinEve!!''

Miley has pulled out of appearing at the Fontainebleau in Miami Beach alongside Pharrell Williams in favour of the iconic New Year's gig, where she is expected to perform her recent hits including 'Wrecking Ball' and 'We Can't Stop' just before the clock strikes 12.

She added: ''I'm bummed I won't be in Miami, wanna thank the homies @Fontainebleau 4 their support #turnupforme. [sic]''

Ryan - who hosts the annual show - first announced the scandalous star's involvement on 'Jimmy Kimmel Live' and revealed he was excited to see what flesh-baring outfit she wears next.

Referring to the recent cold weather in New York, Jimmy joked: ''If she's almost naked like she usually is in Times Square on New Year's Eve she's going to die.

''She's going to die on the show. She's at least going to get frostbite of some kind.

''I'm wondering what she'll wear because all year she's worn provocative outfits. We'll see what she's gonna wear in Times Square, but we're excited to have her.''