Miley Cyrus Shows Off Her New Image in Performance with Borgore 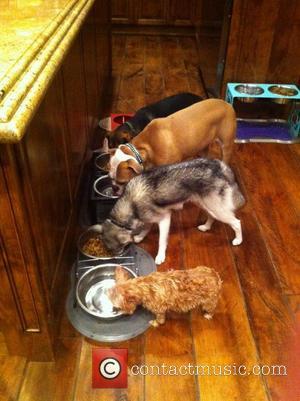 Picture: Miley Cyrus posted this image of her dogs on Twitter with the caption 'Phat ass babies'

Miley Cyrus continues to move away from her carefully-crafted Disney starlet image. Over the weekend, she went on stage at the Music Box in LA, alongside Borgore to perform their collaborative track, Decisions. During the performance, the former Hannah Montana star was dressed in a crop top, skin-tight pants and over-the-knee snakeskin boots and sporting her brand new buzz cut. To add to the image, Miley performed alongside a topless dancer and almost rivaled her bumping and grinding skills, while performing the dubstep track. The performance is part of Cyrus’s effort to cut away from her Disney Channel days, and, despite not being at her best vocally, it looks like it’s stirred up enough controversy to get the media to notice.

The video for the track, which features lines like “Yes I want it all so I get it all/ I wanna eat the whole cake/ I'm not sharing/ You should have learned bitches love cake” was released in November. It features Borgore, Cyrus and her fiancé Liam Hemsworth, covered in cake and partying with the best of them.

Decisions is certainly not the only project Miley has been working on recently. The singer has been working on her next studio album, which she has described as “something new and different”. It certainly seems like it, with US Magazine having reported that she has enlisted the likes of Pharell and Mac Miller to produce the record.