Miley Cyrus Rang In The New Year By Performing Sick 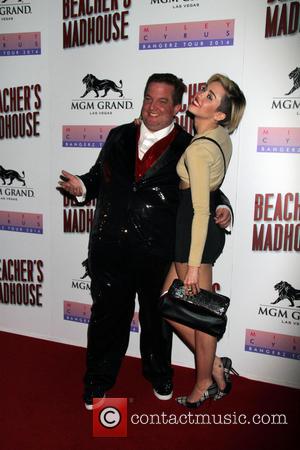 The pop star, who scrapped a show in Florida to perform as part of Tv network ABC's end-of-year Tv marathon, sang Get It Right and Wrecking Ball just before midnight, but it was too cold for her to 'twerk' or show off too much skin. Instead, she and three dancers hit the stage in matching gold outfits and the pop star also wore a floor-length white winter coat to keep off the chill.

Cyrus smiled through the show even though she was ill - shortly before taking to the stage, she tweeted, "This cough/cold is not a good combo. please keep praying for me. If I can just get thru tonight I can have a nice lil break."

She cheered up just before taking the stage when she told host Ryan Seacrest all about her "modest" costume, revealing, "This is the most clothed I've been in all of 2013... Due to standards and practices and also the cold weather, this is what we came up with."

And she started 2014 with high praise from Courtney Love, who ended 2013 with the post, "if it wasn't for @MileyCyrus 2013 would've been a dull dreary year. if you can't agree with that, you're an idiot."

Melissa Etheridge also got the Times Square revellers ready for 2014 by singing John Lennon's peace anthem Imagine just before midnight, and the coverage then bounced to Billy Joel performing across the Big Apple at the Barclays Center just after the famous ball drop and the start of 2014.