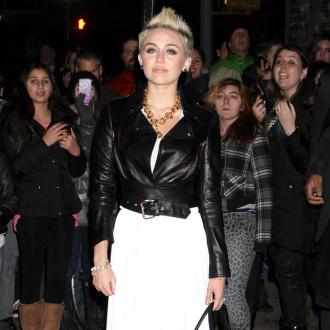 The 20-year-old 'Touch the Sky' singer - whose relationship with Australian actor Liam Hemsworth, 23, has been on the rocks recently amid allegations of cheating and wild partying - was due to tie the knot in June but the couple have decided to put their big day on hold as they continue to work through their issues.

A source told Life & Style magazine: ''They were supposed to get married in June.

''But there have been so many problems with them, they thought it was best to work out their issues before making such a big commitment.

''They aren't ready. Their families are both concerned. They don't want to see Miley and Liam get married and then get divorced. They're very young to be getting married.''

'The Hunger Games' star's sister-in-law Elsa Pataky, who is married to his brother Chris Hemsworth, 29, confirmed on Monday (08.04.13) that she is not sure if their wedding in still on.

But Liam's other brother Luke, 31, recently praised Miley and said she is already part of their family.

He told Entertainment Weekly magazine: ''She's great. She loves our kids, and our kids absolutely love her. She won our hearts.

''I find her really interesting. I find her very articulate, and years in maturity above her age.

''But at the same time, she's very much like Liam.

''I think a lot of people don't realise that they are really, really in love. They actually are a perfect match in a lot of ways.''