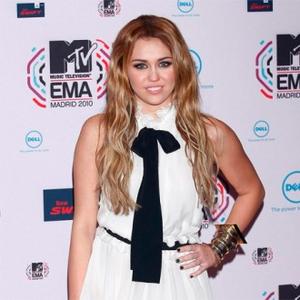 The 18-year-old singer-and-actress - who shot to fame playing the titular character in the Disney TV series from the age of 12 - is looking forward to hosting 'Saturday Night Live' tomorrow evening (05.03.11) but regrets the fact she no longer gets to portray the student and secret pop star on the hit show.

Asked if she misses 'Hannah Montana', she told US TV talk show host Jimmy Fallon: "Yeah. I miss doing that stuff you know.

"I love doing this and writing the skits and everything [on 'SNL]'. I mean, I kinda want to beg to let them let me stay for a little while."

Miley also donned a fake moustache during her appearance on the talk show after revealing she is obsessed with facial hair.

She admitted: "I have a diamond moustache with me at all times.

"I collect all kind of things with moustaches - pins and mugs and people."

While Miley misses 'Hannah Montana', her father Billy Ray Cyrus - who also appeared in the show - recently claimed it had ruined his family.

The country singer - who is in the process of divorcing wife Tish - said: "The damn show destroyed my family. I hate to say it, but I'd take it back in a second."