Miley Cyrus wishes she could be like her hero Lil Kim everyday.

Miley Cyrus thrilled Lil Kim so much when she donned an almost identical replica of her risque 1999 VMA outfit this Halloween, that all she wanted was to cop a feel.

The 'Wrecking Ball' hitmaker's Twitter selfie of this year's Halloween outfit hardly shocked us; a purple wig covering her cropped locks and an embellished purple jumpsuit that covered only one side of her torso, while a flower shaped pasty concealed her left breast (well, nipple) and two other stickies were applied to her left arm. Yes, there wasn't much left to the imagination boob-wise, but judging by her recent fashion ventures, this was rather tame.

The outfit was pretty much exactly the same as rapper and singer Lil Kim's at the 1999 MTV Video Music Awards - whether she was trying to make a point that she's not the only controversial dresser to have ever graced the award show, or that she just unconditionally adores Lil Kim, is hard to say.

Either way, Miley's muse was thoroughly impressed and posted a rather honest post on Twitter in response. 'Awwww. Look at my baby @mileycyrus tonight!!! Looking GORGEOUS!!! I wish I was there to squeeze your boob :) :) Love...', she said.

The feeling's probably mutual, as Miley's not exactly afraid of getting up close and personal. It seems that she has no regrets about her unusual choice of fancy dress either, posting during her night out on October 31st 2013: 'I wanna be @lilkim everyyyyydayyyy'. 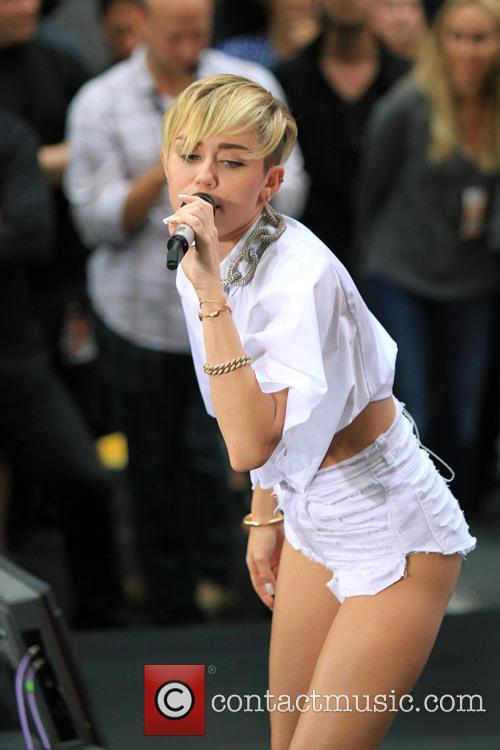