Miley Cyrus is reportedly obsessed with cupcakes and says her mother Tish also has a ''problem'' with the sugary treats. 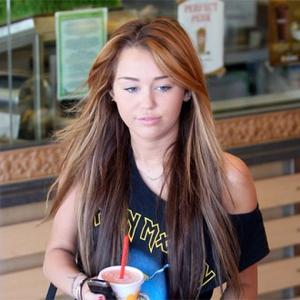 Miley Cyrus is obsessed with cupcakes.

The singer-and-actress was reportedly delighted when she came across a dessert stand backstage at the Nickelodeon Kids' Choice Awards on Saturday (02.04.11) as it was stocked with her favourite type of sweet treat.

An onlooker told website HollywoodLife: "Miley was with her publicist and told her to hang on for a second so she could come over to the Sprinkles cupcakes area and get a mini-strawberry and a mini-red velvet cupcake.

"Miley was like, 'You don't understand, Sprinkles is my thing,' and said her mom 'has a cupcake problem' too."

While attending the star-studded event in Los Angeles, Miley was quizzed on rumours she has reunited with former boyfriend Liam Hemsworth.

However, she shrugged off the questions, saying only: "Shhh! I'll never tell. My lips are sealed."

The 18-year-old star is preparing to tour Liam's native Australia and she can't wait to get back on the road again.

She told US TV show 'Extra': "I love being on the road and travelling."

Miley and Liam, 21, split last August after around a year of dating, before reconciling the following month and eventually splitting again in November.