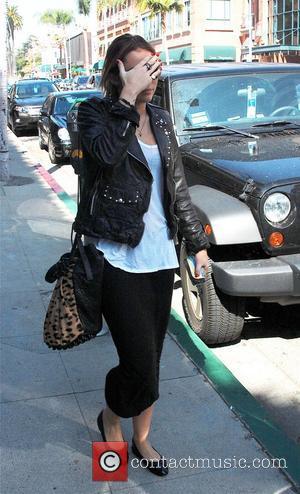 Picture: Miley Cyrus holds her hand to her face to escape having her picture taken as she walks along a sidewalk in Los Angeles Los Angeles,...

Miley Cyrus will be giving her vocals for Sony Picture Animation's Hotel Transylvania. Miley Cyrus will be playing Dracula's daughter, with the Count being voiced by comedian Adam Sandler.
In the upcoming movie, Cyrus is voicing Mavis, a teenage vampire whose father is in control of the vampire and monster community. Dracula constructs a luxury resort where other famous monsters and their families can kick back and relax without the hassle of humans pestering them. However his actual ulterior motive for the resort is to keep hormonally charged Mavis under his watchful eye. Dracula's plans are threatened when a human winds up at the resort and fancies Mavis. Other stars lending voices include David Spade (The Invisible Man), Kevin James (Frankenstein), and Cee Lo Green (Murray the Mummy). The film is being directed by 'Samurai Jack' creator Genndy Tartakovsky. Still in production, the film will be in cinemas in September 2012. This will be the second time that Miley Cyrus will give her vocals for a feature animated movie, after she appeared in Disney's 2008 'Bolt'. In other news, Josh Holly, the self-confessed Miley Cyrus hacker, has avoided jail for pleading guilty last April to possessing about 200 stolen credit card numbers as well as running a celebrity MySpace pages spam scam which made him $100,000. He had boasted in 2008 that he had cracked the Gmail account of Miley Cyrus and had stolen provocative pictures.
Miley Cyrus will also be starring alongside Demi Moore in the comedy 'Lol' next year.