Miley Cyrus hired an animal medium to contact her late dog Floyd, who passed away in April earlier this year. 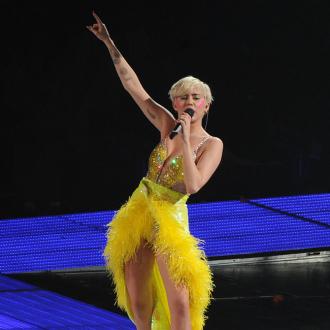 Miley Cyrus hired a psychic to contact her dead dog.

The 'Wrecking Ball' singer was left devastated when her Alaskan Klee Kai, Floyd, was killed by a coyote in April earlier this year and she has sought comfort by hiring a medium to get in contact with her deceased pooch.

Animal medium Melissa Bacelar revealed that Miley felt a great deal of guilt about not being there when Floyd died.

She told the Daily Mirror newspaper: ''It was particularly hard as [Miley] wasn't there when Floyd died, so there would have been a huge amount of guilt.

''I connect with the dog telepathically. Some will give me actual words but, most of the time, I will get images and feelings which I pass on to the owner.''

The 21-year-old singer has had a very public grieving period, including sharing many photos of her shrine to the late dog on Instagram and getting a tattoo of Floyd underneath her armpit.

After announcing the news on Instagram, the blonde was adamant that Emu was not a replacement for Floyd, as she wrote: ''There will never be anyone like Floyd. There was a bond that was so deep it's irreplaceable but that's not what I am trying to do. Never will I replace Floyd and that's something I had to take time to understand.''