The Blonde Wig Has Been Off For A While, But Miley Cyrus Put On A Purple One To Channel Her Inner Lil' Kim This Halloween

Happy Halloween! Let Miley Cyrus give you some costume inspiration. 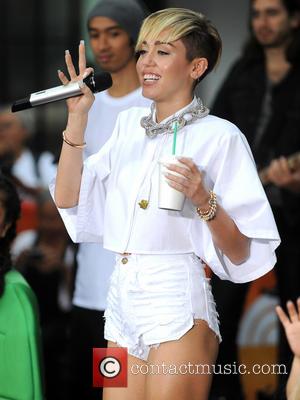 Last year it was Nicki Minaj, this year it’s Lil’ Kim – can you spot the pattern in Miley Cyrus’ Halloween costumes? Miley does seem to be taking some cues on attitude and performance from the hip hop divas, so it makes sense that she’d want to dress up as them for Halloween. There was that saying about imitation and flattery after all.

The borderline NSFW look was still one of the better ones we've seen this year.

Once upon a time, the most shocking thing on television was not Ms Cyrus’ latex-clad form, but Lil’ Kim herself. During the 1999 VMAs (because of course it was the VMAs) the rapper set tongues wagging and prompted thousands of concerned citizens to write Angry Letter with her infamous purple pastie covering the bit of skin that still remains too scandalous to show on television (but only if women do it.)

We can definitely see Cyrus following in the diva's footsteps.

So can you guess which outfit it was that Cyrus chose to recreate for tonight’s festivities. The singer dropped a few instagram hints at her costume earlier this week, showing off her newly acquired bright purple wig. Of course, not everyone was a fan of the revealing getup, but judging by the photos, Miley has taken fellow pop princess Britney Spears’ advice from a recent track and was definitely working it. So apparently, while Miley has made it clear that she will never again put on the bright blonde wig that made her famous, she’s not averse to all kinds of dressup.

It seems the singer isn't just getting her fans' attention.