The ‘Wrecking Ball’ singer also raised $69,000 at the gala, after donating a collage made of Caitlyn Jenner Vanity Fair covers.

Miley Cyrus delivered a powerful speech at the amfAR Inspiration Gala on Tuesday evening, where she was honoured for her work in the fight against AIDS. The singer wore a floor length red gown at the event, held in New York City, which was embellished with heart prints and featured an oversized bow at the back. 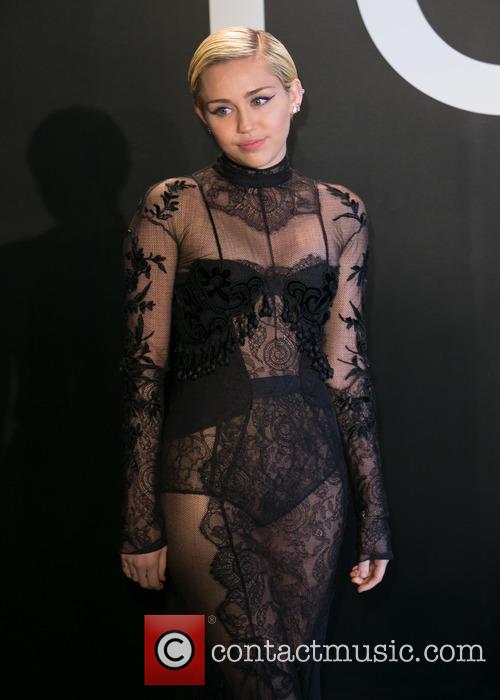 Cyrus’ date for the evening was 24 year old Tyler Ford, who identifies as agender. Introducing Tyler on twitter Cyrus wrote, 'Tyler is a queer, biracial, agender person, whose pronouns are they/them/theirs. Tyler shares about their identity, experiences and hopes saying: "My whole life, I was led to believe that there were only two genders.”

More: Miley Cyrus' Message To Teens: 'You Can Just Be Whatever You Want To Be’

'"I thought I had to shrink myself to fit into a box that was never going to contain me. It took years for me to find words for my gender identity, and to feel comfortable expressing myself as I am.”' Ford is also a close friend of singer Ariana Grande with the two having grown up together in Boca Raton, Florida.

Ford introduced Cyrus to the stage at the gala, to accept her honour and deliver an emotional speech which earned a standing ovation from the crowd. “Getting the Inspiration Award tonight is an honour that is unbelievable,” Cyrus began.

“It seems just way too easy, and it seems that there is no way that I have done nearly enough to be standing here on the receiving end of this honor, but I’m thinking about tonight as not celebrating what me and Happy Hippie have already done but celebrating what we’re going to do, what we plan on doing in the future. Tonight is not a finish line for us, but it’s a starting point.”

"There are so many people around the world right now that deserve this recognition," Cyrus continued. "They’ve dedicated their lives to finding a cure for those living with HIV and AIDS and they use their voices to speak out against the brutal, unfair condemnation and abominable stigma that comes with this disease. By receiving this award tonight, I promise to continue to fight along with such industrious army for a cure for this epidemic."

The singer went on to highlight the work done by amfAR in the fight against AIDS, as well as recognising the work of other famous women such as Elizabeth Taylor and Sharon Stone. Cryus ended by telling the crowd, “We will continue to fight against judgment, and we will find a cure for HIV/AIDS. Thank you very much for having me be a part of that, and I love you very much.”

You can watch Miley Cyrus’ amfAR speech in full here: