Miley Cyrus got ''Rolling $tone'' tattooed on the soles of her feet while she was being interviewed for the magazine of the same name. 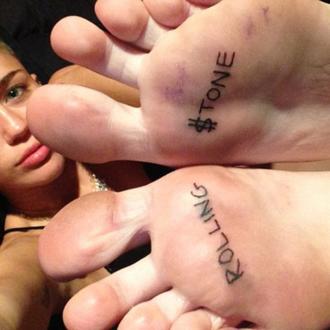 Miley Cyrus has got ''Rolling $tone'' tattooed on the soles of her feet.

The 20-year-old pop star got the inking during an interview with Rolling Stone magazine as she wanted to do ''something fun''.

She has shared an image of her new tattoo with her millions of fans on her Instagram page.

Miley posted a photo which shows the words ''Rolling'' on her right foot and ''$tone'' on her left foot in black ink, and she captioned the image ''#rattatattat @RollingStone (sic)''

During the interview the 'Wrecking Ball' hitmaker explained her decision to have the tattoo to contributing editor Josh Eells, saying: ''I thought about going to play laser tag. But laser tag sucks. We could have gone bowling, but what are we, 90?''

Miley appears on the magazine cover naked where she is standing in a swimming pool licking her right shoulder and her tattoo of a dreamcatcher, which is on her right rib cage, is on display.

The former 'Hannah Montana' star got her first tattoo in 2009 at the age of 17 and since has slowly added to her collection, with notable designs including the Roman numerals VIIXCI - which stand for 7/91 the month and year her parents Billy Ray Cyrus and Tish met - a quote that reads ''So that his place shall never be with those cold and timid souls who neither know victory nor defeat'', and the words ''just breathe''.

In addition, she has skulls on her ankles, the Hindu ohm symbol and an anchor on her wrists.

When she's not going under the needle herself, Miley is convincing other people to get tattoos and she claims she convinced 47-year-old actor Stephen Baldwin to have the initials of her alter-ego Hannah Montana etched on to his shoulder.

She told Rolling Stone magazine: ''People get tattoos of the most f***ed-up s**t. Did you know Alec Baldwin has Hannah Montana's initials tattooed on him? No, wait - Stephen Baldwin. He said he was my biggest fan, and I told him my biggest fans have tattoos. So he got tattooed on his shoulder.''