Miley Cyrus has had a new tattoo following her reported split from Liam Hemsworth, this time getting two hearts etched onto her wrist by ink master Kat Von D. 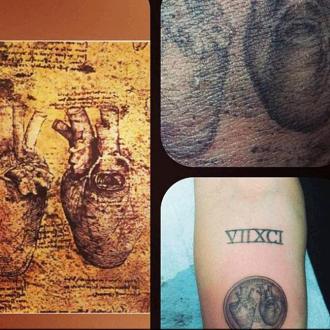 Miley Cyrus has had a new tattoo following her reported split from Liam Hemsworth.

The 20-year-old singer and her 23-year-old fiancé Liam Hemsworth have been the subject of speculation about the state of their relationship and in a bid to show the world she's not letting her personal problems get her down, she has had two hearts etched onto her wrist.

Miley - who has several other tattoos - got the inking done at tattoo master Kat Von D's High Voltage store over the weekend and Kat was quick to show off the final result, which is inspired by Leonardo da Vinci's anatomical heart.

In a Twitter post, Kat wrote: ''Just did the RADDEST tattoo on @MileyCyrus - a miniature rendition of a daVinci anatomical heart! (sic)''

She then posted a picture of her needle work.

Despite reports claiming Miley and Liam have ended their three-year romance, the former 'Hannah Montana' star insisted the engagement is still on and was getting her ring cleaned.

Last year, the pair had matching tattoos - with them both getting a line from President Roosevelt's famous 'Citizenship in a Republic' speech.

Liam's read, ''If he fails, at least fails while daring greatly,'' a line which comes just before the section which Miley has on her arm.

Her tattoo says, ''So that his place shall never be with those cold and timid souls who neither know victory nor defeat''.