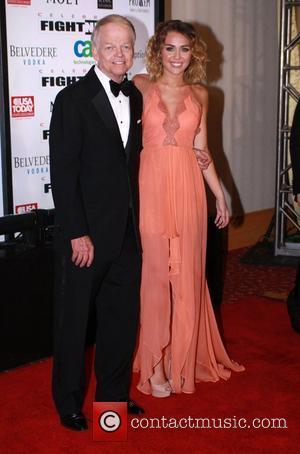 Miley Cyrus has left tongues wagging after tweeting a picture of herself wearing a diamond engagement ring. Miley Cyrus posted up the picture just before she was boarding a flight outside of Los Angeles.

The picture shows a large diamond ring on her engagement finger, whilst Cyrus further promoted a brand of nail polish. She wrote: 'I am soooo obsessed with @jennahipp nail foundations! It looks so chic and classic!" Take a look'. It is still unknown whether she and Liam Hemsworth have decided to tie the knot. Cyrus, 19 and Hemsworth, 22 have been dating since meeting on the set of their 2009 film "The Last Song."

Hemsworth is celebrating success after 'The Hunger Games' pulled in a mammoth $68.3 million on its opening day in the US alone. To join in with the festivities, Cyrus tweeted on Friday: 'Happy Hunger Games everyone. Can't wait for everyone to see it! Such an amazing film! Jennifer Lawrence is genius.' 'The Hunger Games' was released across cinemas in the UK on Friday (23 Mar 2012). Miley Cyrus meanwhile will next be seen in comedy 'So Undercover' later this year.

The former Hannah Montana star signed up for Celebrity Fight Night in Arizona, which also doubled as a 70th birthday bash for the famous boxer.