Miley Cyrus is grateful to her drug mishap in 2010 because it made hip-hop producer Pharrell Williams want to work with her. 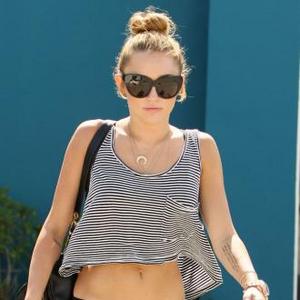 Miley Cyrus is thankful her drug mishap made Pharrell Williams want to work with her.

The 19-year-old singer - who was caught on camera smoking the psychedelic drug salvia in December 2010 - is grateful for the highly publicised incident because it made hip-hop producer Pharell Williams want to make a record with her in order to set her ''free''.

The former Disney star told Marie Claire magazine: ''It was magic. Pharrell said, 'Don't be offended because this is how I talk, but [I thought], That b***h is actually living.

''She's not sitting there with her Momager's chain on her door. I want to free that b***h. I want her out of her cage'.''

The 'Hannah Montana' actress - who is engaged to 'Hunger Games' star Liam Hemsworth - said the pair had a magical time in the recording studio and Pharrell has since become like a brother to her.

Miley gushed: ''I'd never worked like that before. I was talking to him like he was an older brother, and everything I said was going onto the track...

The teen singing sensation added that the N.E.R.D. rapper has always been a fan of her talent.

Miley said: ''Pharrell saw me dancing to Madonna songs on YouTube when I was young and said, 'I see something in her'.''

The singer is pleased a positive outcome has come out of the controversial video which threatened to ruin her career.

She lamented at the time of the incident: ''I'm not perfect. I made a mistake... I'm disappointed in myself for disappointing my fans.''