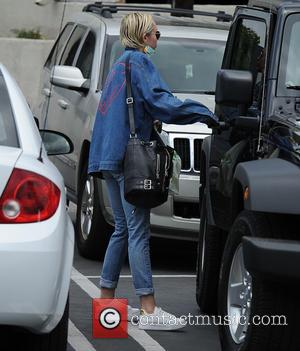 Picture: American pop star Miley Cyrus was snapped as she was out for lunch with a friend. Miley was wearing a denim jacket covered in retro...

The pop stars performed a cover of Crowded House's Don't Dream It's Over while hanging out on an inflatable green sofa, wearing hooded animal-themed onesies and flirting with each other.

At one point, Cyrus, wearing a unicorn one-piece, asks her friend, "Are you a mouse or a bear?" adding, "Whatever you are, you're totally the cutest mouse/bear."

Grande later comments, "You're the cutest unicorn in the world."

Their girl-on-girl flirt fest upsets the flow of the track as Grande misses her cue to pick up the song after a bridge, prompting her hostess to accept the blame and say, "I was flirting, sorry."

At the end of the tune, the Problem hitmaker dives on Cyrus and gives her a big hug.

Miley's back garden video sessions were taped to raise awareness about youth homelessness and to benefit her new The Happy Hippie Foundation, which she launched recently to help the homeless.

Meanwhile, Miley was the toast of an Adult Swim TV network party in New York City on Wednesday night (13May15), when she hit the stage as a nearly-topless butterfly and lit up a joint, which she passed to the crowd.

During her quirky, suggestive set, Cyrus performed her cover of Paul Simon's 50 Ways To Leave Your Lover and a rendition of Khia's provocative 2002 hit My Neck, My Back.