Miley Cyrus has criticised Nicki Minaj for her comments about the VMA nominations.

Miley Cyrus wasn’t impressed when Nicki Minaj complained about not receiving nominations for certain MTV Video Music Awards. 22-year-old Cyrus is hosting the awards on Sunday (30th August) but she had a few things to say about Minaj’s reaction to the nominations. 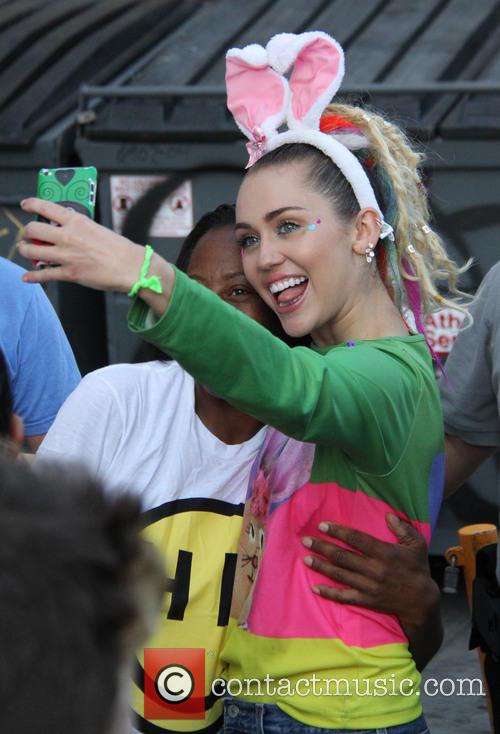 Miley Cyrus posing for fans outside ABC studios in Los Angeles in August.

Last month, shortly after the nominations were announced, Minaj took to Twitter to complain that her music video for ‘Anaconda’ had not received a nomination for Video of the Year. Minaj claimed it was both a racial and body size issue.

‘If your video celebrates women with very slim bodies, you will be nominated for vid of the year,’ Minaj wrote on Twitter. ‘I'm not always confident. Just tired. Black women influence pop culture so much, but are rarely rewarded for it.’

In a recent interview, Cyrus criticised Minaj for her complaints and suggested it was simply a case of sour grapes. Speaking to NY Times, Cyrus claimed she hadn’t closely followed Minaj’s complaints and subsequent quarrel with Taylor Swift. However, she was aware Minaj was only angry about her own position and was not drawing attention to “bigger” issues such as race.

“I didn’t follow it. You know what I always say?” Cyrus said during the interview. “Not that this is jealousy, but jealousy does the opposite of what you want it to — that’s a yoga mantra. People forget that the choices that they make and how they treat people in life affect you in a really big way. If you do things with an open heart and you come at things with love, you would be heard and I would respect your statement. But I don’t respect your statement because of the anger that came with it.”

Cyrus continued by explaining how Minaj could have addressed the issue of race within the music industry. Furthermore, she criticised Minaj for drawing attention away from the issue by getting into a Twitter quarrel with Swift.

“If you want to make it about race, there’s a way you could do that,” Cyrus continued. “But don’t make it just about yourself. Say: “This is the reason why I think it’s important to be nominated. There’s girls everywhere with this body type.”

Read More: Demi Lovato And Pharrell Among Performers For This Years MTV VMAs.