Miley Cyrus has criticised Taylor Swift for promoting violence in her video for 'Bad Blood', insisting the use of guns is much worse than when Miley got nude for her 'Wrecking Ball' video. 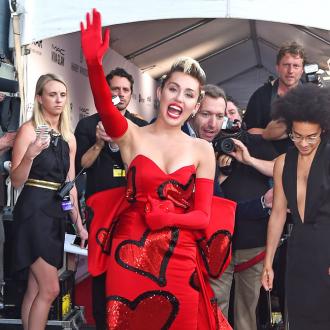 The 22-year-old star has accused the 'Shake It Off' singer of setting a bad example to her fans with her 'Bad Blood' music video, in which a flurry of famous faces including Lena Dunham and Selena Gomez are part of a Taylor Swift-led army.

Speaking about the video, she said: ''I don't get the violence revenge thing. That's supposed to be a good example?''

Her ''revenge'' comment is also believed to be referring to the song's subject matter which is allegedly the on-going feud between Taylor and 'Dark Horse' hitmaker Katy Perry, who have fallen out in recent years.

And Miley - who is currently working on her fifth studio album with producer Mike WiLL Made It - continued to question the difference in public perception between her and Taylor, insisting the use of guns in the clip is much worse than when she appeared naked in her 2013 video for 'Wrecking Ball', which has amassed almost 800 million views on YouTube.

Speaking to Marie Claire magazine, she questioned: ''And I'm a bad role model because I'm running around with my t***ies out? I'm not sure how t***ies are worse than guns.''