'Wrecking Ball' singer Miley Cyrus went on a raunchy night out with supermodel Kate Moss as the two enjoyed an x-rated party at Madame JoJo's in Soho. 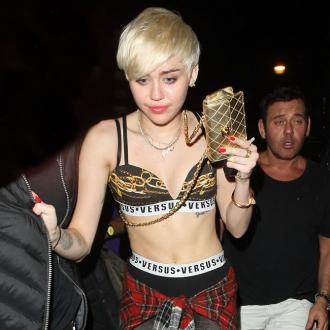 Miley Cyrus and Kate Moss enjoyed a raunchy night out in London.

The 'Wrecking Ball' hitmaker is currently on tour in the UK, and she partied all night with the supermodel at Madame JoJo's in Soho, which was ''decorated especially'' for their guests.

''She and Kate were inseparable. Things kicked off when Miley's dancers got up on stage just in knickers and boob tassels.''

The night got even racier when the two stars joined the dancers, with the controversial singer even ''spanking'' Kate.

The source added: ''At one point, Mossy had her head in a dancer's boobs while Miley spanked her from the back.''

The twerking star seems to be on the mend after falling ill recently, and had even insisted she was going to stay sober on the tour.

She previously claimed: ''I'm probably the only one on this tour who doesn't drink or smoke before a show, as I take this really seriously.

''It's almost like being an athlete being up here, because if someone was f**ked up, they definitely couldn't do my show.''