Miley Cyrus and Robin Thicke will perform at the Z100 Jingle Ball in New York tomorrow along with a host of big names. 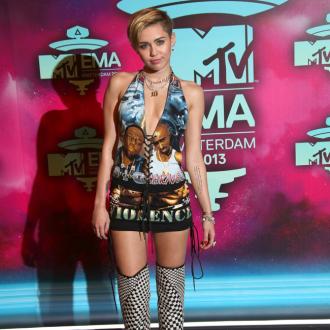 The 'Wrecking Ball' hitmaker and R&B star are among a host of top stars taking to the stage at Madison Square Garden.

The pair will return to New York following their raunchy show at the MTV Video Music Awards in the city in August, when the 21-year-old performed 'Blurred Lines' with Robin and twerked against him while wearing a flesh-colored, latex bikini and suggestively rubbing herself with a foam finger.

New York radio station Z100 is yet to confirm whether the acts will sing together at the ball but Robin has insisted he will not appear on stage with Miley again after the furore over their performance.

The acts will be joined at the 18th annual concert by duo Macklemore & Ryan Lewis, Selena Gomez and Ariana Grande, Miami rapper Pitbull, and Enrique Iglesias.

Fifth Harmony, Jason Derulo, Fall Out Boy and Austin Mahone who are also on the bill.

Austin said: ''I'm really excited to be a part of Jingle Ball. They're always a lot of fun every year. And I get to meet a lot of really cool artists and share my music with a lot of people. So it's going to be a blast.''

The concert will benefit the Ryan Seacrest Foundation and will be aired as a two-hour TV special on The CW channel.