The singer has just released new record ‘…And Her Dead Pets’ for free on Soundcloud.

Miley Cyrus didn’t disappoint as host of the year’s MTV VMAs on Sunday (August 30th). The ‘Wrecking Ball’ singer led the ceremony in all her barely dressed, tongue sticking out glory, making the awards more colourful and glittery than ever before, even if Nicki Minaj wasn't too impressed. The singer opened the ceremony by telling the audience, "This is a show that hasn't had a host in the last two years, a tradition they will probably return to after tonight's show.” Cyrus then showed a pre-taped sketch which featured 'The Mindy Project‘s' Ike Barinholtz and 'Brooklyn Nine-Nine‘s' Andy Samberg.

But Cyrus nearly had her party damped when Nicki Minaj took to the stage to accept her award for Best Hip-Hop Video. Looking towards Cyrus Minaj said,  “And now… back to this bttch that had a lot to say about me the other day in the press, Miley Cyrus. Miley, what’s good?” .

More: Miley Cyrus Describes Herself As Pan-Sexual And Not Currently In A Relationship

However Cyrus quickly responded telling Minaj, "We're all in this industry, we all do interviews, and we all know how they manipulate them. Nicki, congratulations.” Minaj was responding to comments Cyrus had made in the New York Times late last week, regarding her statements about racism in the music industry after the VMA nominees were announced. 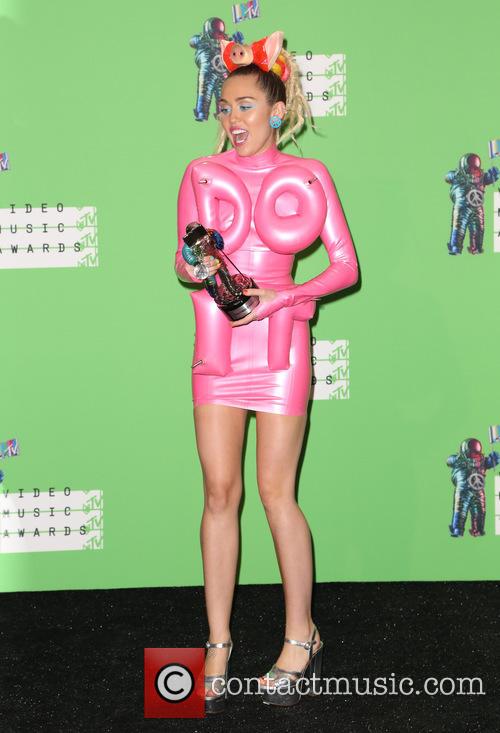 Miley performed new song, ‘Dooo It!’, at the awards.

"And it's not anger like, 'Guys, I'm frustrated about some things that are a bigger issue.' You made it about you. Not to sound like a b**ch, but that's like, 'Eh, I didn't get my VMA'... If you want to make it about race, there's a way you could do that,” Cyrus added.

But Minaj's call-out wasn't enough to ruin the party. Cyrus ended the night by performing new song, ‘Dooo It!’, after she was introduced to the stage by many of the young people she had spotlighting on Instagram in June during her #InstaPride campaign.

But once the awards were over Cyrus still had one more surprise. The singer announced she was immediately releasing new album, ‘And Her Dead Pets’ for free on her website. The album features 23 tracks, with guest spots from artists including The Flaming Lips and Ariel Pink.