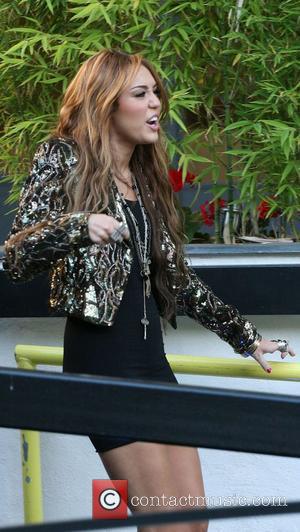 Miley Cyrus has provoked more controversy on her trek through Europe - she simulated a lesbian kiss with a backing dancer during an appearance on live TV in Britain.
The 17 year old was invited to perform her new single Can't Be Tamed on Britain's Got Talent in front of the show's creator Simon Cowell and fellow judge Piers Morgan on Thursday night (03Jun10).
But she stunned viewers of the family-friendly programme with a raunchy routine in which she cavorted on stage in a skimpy basque and ripped fishnet stockings, and pretended to kiss a female dancer.
At one stage during the performance, a male dancer grabbed at the Hannah Montana star's breasts - and she pushed his hand away in mock surprise.
Last weekend (29-30May10), Cyrus shocked fans during a gig in Lisbon, Portugal by wearing a skin-tight leotard onstage. Last month (May10), a video showing her dirty dancing with a 44-year-old movie producer in a bar when she was aged 16 surfaced online.
The teen star is currently on a promotional tour of Europe for her upcoming album, Can't Be Tamed, which is due for release later this month (Jun10).