Cyrus Pulls Out Of Premiere Over Volcano Chaos 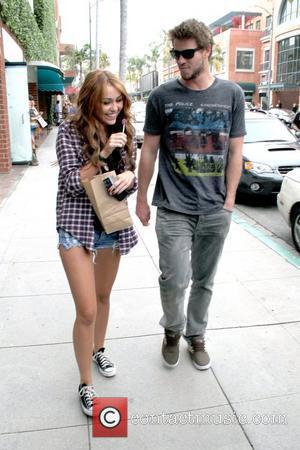 Picture: Miley Cyrus and Liam Hemsworth Miley Cyrus sucking on a lollipop while walking in Beverly Hills with her boyfriend Los Angeles, California - 15.04.10

Miley Cyrus has been forced to pull out of an appearance at the U.K. premiere of her new movie THE LAST SONG - after the volcanic ash chaos left her unable to travel to Britain.
Almost all flights across northern Europe have been grounded following the eruption of a volcano in Iceland, which has left a cloud of ash floating in the skies above the continent.
No planes are being allowed in or out of the U.K., and the chaos has left Cyrus unable to fly over from America for the screening of her movie, which was due to take place in London on Tuesday evening (20Apr10).
Cyrus and her boyfriend/co-star Liam Hemsworth are both unable to attend the event. As WENN went to press it was unclear whether the premiere would still go ahead without the stars.