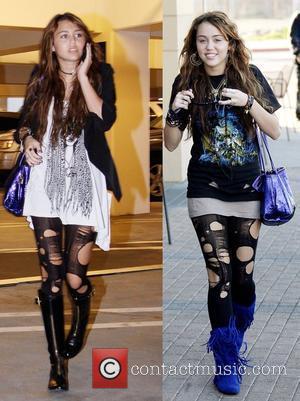 Pop sensation Miley Cyrus has blasted critics who branded her a "poser" for wearing heavy metal T-shirts, insisting she is a true Iron Maiden fan.
The Hannah Montana star has been spotted donning an assortment of rock shirts in recent months, including an Iron Maiden tee on Saturday (17Jan09).
But the star is adamant she is actually a follower of the British metal band - and isn't just wearing the garment to look cool.
In a video posted on clip-sharing website YouTube.com, Cyrus says, "I'm sure you all have seen me rocking an Iron Maiden shirt lately and I know there's been some people saying, 'Oh, she's a poser,' and 'The only reason she's wearing Iron Maiden is because she wants to be a rock star.'
"So, Iron Maiden - Run To The Hills, Fear of the Dark, Running Free, (all) good song(s), check it out. So thank you, guys. I actually do like Iron Maiden."