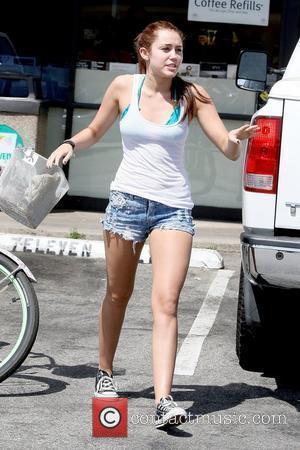 Picture: Miley Cyrus rides her bicycle with her boyfriend and 'The Last Song' co-star to 7-Eleven in Toluca Lake Los Angeles, California - 26.03.10

Miley Cyrus has spoken out for the first time about her pro-gay marriage stance, which landed her in big trouble with America's religious activists - and the star remains defiant about the comments she made that effectively led to her closing her Twitter.com account.
The teenager has admitted she was tired of sharing her private life with her online followers - but that wasn't the only reason she decided to shut down the blog.
Appearing on gay TV personality Ellen DeGeneres' chat show on Wednesday (31Mar10), Cyrus confessed the hatemail she received for going public with her feelings about gay marriage helped her make up her mind.
She explained, "I was asked a question; it wasn't like I was trying to force my opinion on anyone else... I was asked the question, 'Miley, what do you think?' And I said, 'I believe there's no other judge but God. I'm not one to tell someone that they can't love someone else when I'm happily in love with someone...'
"Then I got people hating me for believing in love... It seems very twisted to me.
"I guess it's better to keep your opinions to yourself, but I never regret what I say, I guess, when I speak my opinion - because if I'm asked I will tell you."