Milagres new single, Here To Stay, will be released on January 16th, 2012, through Memphis Industries. It is taken from their debut album, Glowing Mouth, which will also be released in January 2012. Milagres will be playing four UK dates in January, to coincide with the release of both the single and the album.

Milagres formed after frontman Kyle suffered a serious back injury while hiking in British Columbia. The months in hospital saw Kyle's interest for songwriting rekindle. Upon his release, Kyle headed back to New York to form Milagres and set to work on ther first album.

The video for Here To Stay focuses on a declining relationship between a married couple, portrayed by puppets.

Milagres will touring with Cymbals Eat Guitars; the full list of their UK dates are as follows: 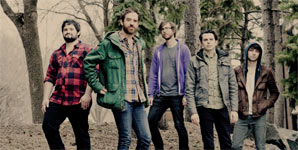