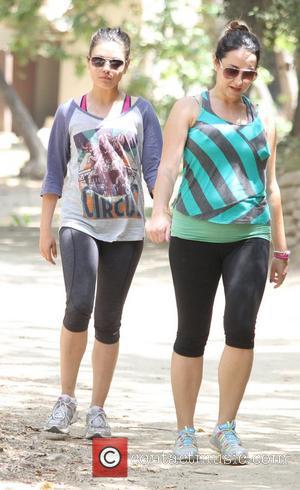 Black Swan star Mila Kunis has brushed off rumours she is dating Ashton Kutcher, declaring, "I am totally single."
The former That 70s Show co-stars, who played high school sweethearts on the sitcom, were linked together after enjoying a cosy meal in Los Angeles last month (Jun12), but the actress is adamant Kutcher is just a friend.
She tells Britain's Elle magazine, "I am totally single... Listen, we hang out. We've known each other for 15 years. We have mutual friends. We're comfortable with one another. That's it! There's no crazy love story, nothing more."
Kunis' love life has been barren since she split from longterm boyfriend MACaulay Culkin in 2010, and she blames life in the spotlight for making it difficult to enjoy dates.
She adds, "Is a guy going to come up to me and ask if he can take me out on a date? Where can I go and have this date? I can't go anywhere! My house, his house... So what do you do? I'm trying to be like a normal girl and a single girl... but the concept of being single and in my position is just not workable. I couldn't even go on a date if I wanted to!...
"I don't go out because when I do, everybody sees me. It's not like I'm having illicit rendezvous because there's no such thing as secret in my life."