Mila Kunis Sends Message To All Future Fathers: Stop Saying "We Are Pregnant"

While appearing on 'Jimmy Kimmel Live,' the 30 year-old actress took this opportunity rant about men insinuating they are also carrying a child: "Stop saying, 'We're pregnant. You're not pregnant." Mila Kunis wanted to send a message to any man who is going to become a father.

The pregnant 30 year-old actress appeared on 'Jimmy Kimmel Live!' on Tuesday evening (June 10th), and started speaking about preparing to welcome their children into the world.

But the chat show host angered Kunis when he harmlessly insinuated that he and his wife are with child.

"My wife and I are pregnant," Kimmel said, whose wife Molly McNearney is carrying the couple's first child. "We are having a baby very soon, as well."

An angered Kunis quickly replied, "Oh, you're both having a baby?" in a sarcastic manner. "You and your wife are pregnant?"

At this moment, the 'Jupiter Ascending' actress abruptly stood to attention, grabbed a microphone and began a passionate rant.

"Hello, I'm Mila Kunis with a very special message for all you soon-to-be fathers," she stated while dramatic music suddenly started playing in the background.

MORE: Mila Kunis' baby will be a guest at her wedding

Ashton Kutcher's fiancé added that all pregnant women, and herself, have "your little love goblin growing inside of all of us. All you did was roll over and fall asleep!"

The former 'That 70s Show' star opened up about welcoming her first child early last month, revealing that she and Kutcher want the birth to be natural as natural as possible.

"We watched a couple of documentaries and we looked into the...midwife aspect of it and things, and spoke to my OB/GYN and realized that the hospital that I'm going to be laboring in does a midwife, you know, doula type of thing," she explained. "So I'm gonna do it as all-natural as I possibly can unless there's an emergency or something." 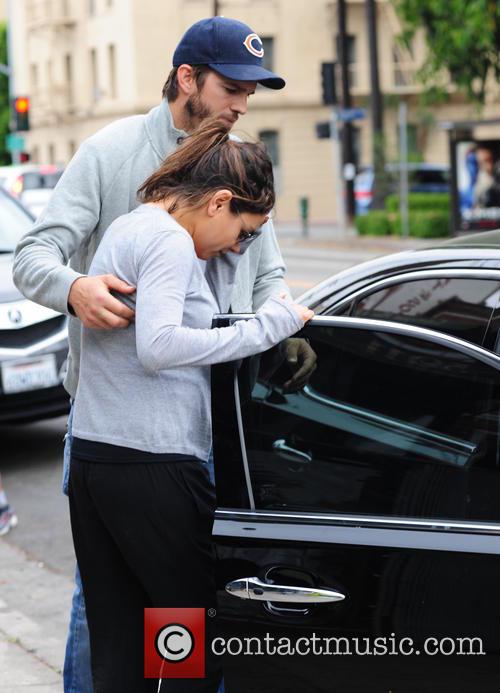 Kutcher & Kunis are expecting their first child together