The actress welcomed her second child with her husband Ashton Kutcher four months ago, and she says that owning dogs is great practice for having children.

Mother-of-two Mila Kunis has declared that owning dogs is brilliant practice for couples ahead of having children.

The 33 year old star was talking at last month’s CinemaCon 2017 in Las Vegas about the upcoming sequel to Bad Moms, titled A Bad Moms Christmas, which is released on November 3rd this year.

Kunis welcomed her second baby into the world in December, a son named Dimitri, with her husband Ashton Kutcher, and the interviewer asked her about how hard motherhood is – flagging up that she had no idea because she only has two dogs.

“It’s the same as having a dog,” Kunis replied, perhaps rather unexpectedly. “I too have two dogs, I’ve always had dogs. I’ve always said have a dog, it’s a good trainer for a kid, I’m not kidding. The difference is you can’t just dump your kid on someone while you’re away.

“But motherhood’s great, I think it’s fantastic. I think we [Kutcher and her] waited until we were in the right headspace in our life to have a child, and I think that makes a huge difference.”

More: Mila Kunis reveals how film producers threatened her career over refusal to do semi-nude photoshoot

Asked about the upcoming film itself, the sequel to Bad Moms which came out in July 2016, Kunis, who also voices Meg Griffin in perennial animated favourite ‘Family Guy’, said: “We haven’t shot it yet, but it’s awesome, it’s hysterical, and we can’t wait for you guys to see it!” 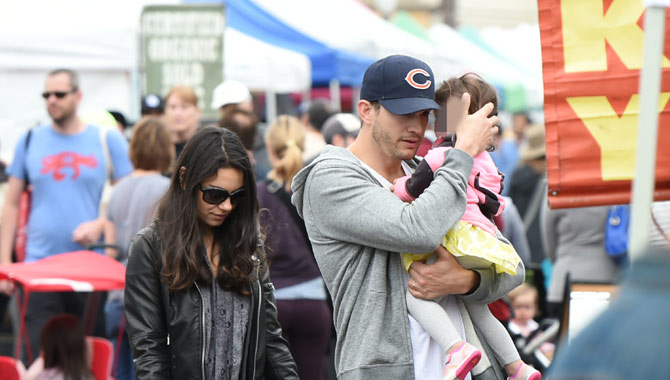 Mila Kunis with Ashton Kutcher and their daughter

“We all put in our stories, there’s a little bit of our own personal stories for all our characters that are going into the script.”

About the festive theme of the sequel and why it would work, Kunis said that Christmas time had an inherently comedic value in such a consumerist society.