Mila Kunis thinks being in love is ''wonderful'' and one of the greatest things that can happen to a person. 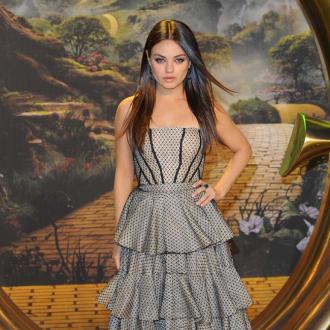 Mila Kunis thinks being in love is ''wonderful''.

The sexy actress has been dating her former 'That 70's show' co-star Ashton Kutcher since his marriage to Demi Moore broke down in 2012, and is notoriously coy about their romance.

But while Mila refuses to discuss her relationship, she admitted to feeling happy and giddy when she's in love.

She joked to Italian magazine Io Donna: ''You can ask me anything about Ashton; I won't answer ... But I can tell you: love is great, love is wonderful and it's all around us [winks]... See? I just gave you an awesome quote!''

The star regularly tops sexiest women in the world polls thanks to her big doe eyes, gravelly voice and long locks, but she admits to finding the accolade embarrassing.

Mila said: ''People keep asking me what I think of being considered sexy, but there's nothing I can say without sounding like a complete idiot! All I can say is, I feel honoured to be considered sexy.''

The 29-year-old star landed her first big role aged 14 and has become one of Hollywood's most in-demand actresses thanks to 'Black Swan', despite never having had any formal training.

She said: ''I've never studied acting or had an acting coach, what I always try to do is give honesty to my character and learn from the people I work with.''