Mila Kunis believes being poor as a youngster helped make her a successful actress. 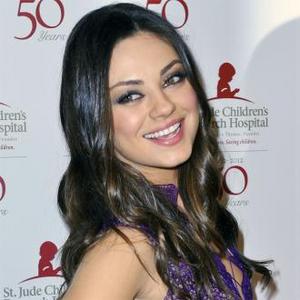 Mila Kunis thinks growing up poor has made her successful.

The 'Ted' actress - who rose to fame on 'That 70's Show' at the age of 14 -says being the daughter of poor immigrants from Ukraine has helped her develop the thick skin she needs to survive in Hollywood.

She said: ''You build it up. My dad always said I have a really good backbone. I grew up in LA, I didn't grow up wealthy or even middle class, we were pretty poor and you learn how life works very quickly.''

While her upbringing helped her find success, Mila says she has been able to hold on to it because she surrounds herself with smart people.

She said: ''The best advice I've been given? That sometimes it's OK to be wrong - you can't always play it safe.

However, she is worried about her future prospects.

She explained to Total Film magazine: ''What happens to women in this industry after the age of 35? You're either the friend or you're the pretty girl so that happens when they get older? You have these 50-year-old gorgeous male actors who get cast opposite a 20-year-old wife. Your parts are limited and most films are male driven.''