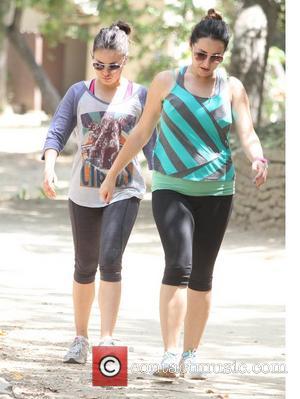 It’s safe to sayMila Kunis and Ashton Kutcher have definitely gone public with their relationship. The Hollywood stars were photographed holding hands while going for a stroll in Central Park, New York, on Monday (September 17, 2012), reports US Weekly magazine.

Kunis, 29, was beaming with delight on her public outing with Ashton, 34, and the pair shared a kiss while sitting on top of a big rock. Aww. The couple have played down a relationship for months, though it all appears to be official now, and they recently enjoyed a romantic vacation together in Bali. Kutcher is in New York to be with Kunis while she films ‘The Angriest Man’, a comedy movie starring Robin Williams. In the August issue of Interview magazine, the actress – who first met Kutcher on the set of ‘That 70s Show’ – said, “Listen, in five years I do hope to have a family, and, you know, who knows? I've always been a big proponent of not working for the sake of working, because I don't want to work for the rest of my life - I want to live. So I'd rather work to live than live to work.”

Ashton split from wife Demi Moore last year, while Kunis was previously in a relationship with Macaulay Culkin.