Actress Mila Kunis Has Armed Herself With A Gun To Protect Her Family Amid Fears They May Fall Victim To Crazed Stalkers. 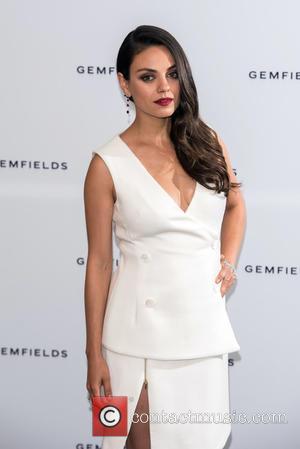 The Ted star, who became a first-time mother last year (14), had a recent safety scare after obsessed fan Stuart Dunn, who had previously been convicted of stalking the beauty, escaped from a psychiatric facility in California in late May (15).

He was recaptured four days later, but Kunis reveals close calls with overzealous devotees and burglars in the past has made her more cautious around the home, and she and her new husband Ashton Kutcher are both well trained to use a firearm if necessary.

Kunis makes the admission in a new interview with Britain's The Telegraph, after she is asked to comment on U.S. President Barack Obama's failure to make strides in the fight for tighter gun laws.

She responds, "I will say this: we have a gun at the house. But would I give it to my daughter as a gift at 15? No.

"I can take a gun apart and put it back together blindfolded. (But) my child shouldn't be as well trained as us, nor should she know there is a weapon in the house - ever. But I respect the gun. My husband grew up in Iowa, and is from a hunting family. He's worked with rifles his whole life."

She continues, "I probably wouldn't have the gun if I didn't have stalkers or people constantly trying to break into my house."

Kunis also touches on her lack of privacy as one half of a hot Hollywood couple, stating, "I think when you are a young actor couple you are screwed. It got to a stage where I couldn't leave the house.

"I love what I do, but the reality is that my privacy is gone. I'm not complaining. I just don't like the idea that my child can't go to the park with her mother. And if she does, then I have to trail a s**tload of paparazzi with me."