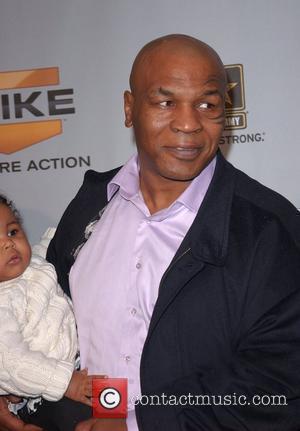 Retired boxing champ Mike Tyson has been left "totally broke" after years of excessive spending and lives pay cheque to pay cheque to cover his monthly expenses.
The sporting icon's legacy has been marred by a series of alcohol and drug-related arrests throughout the years and his wild lifestyle away from the ring led to him filing for bankruptcy in 2003.
He was inspired to turn his life around after landing a role playing himself in the hit 2009 comedy The Hangover, but he insists he is still struggling to make ends meet, despite recently scoring his own reality TV show about his love of bird racing.
However, Tyson insists he is happy with his new frugal way of living and is simply thankful to have been given a second chance at life with his third wife Lakiha Spicer.
Appearing on U.S. talk show The View on Friday (07May10), he says, "I'm totally destitute and broke. But I have an awesome life, I have an awesome wife who cares about me."
Asked if he has enough money in the bank to tie him over between jobs, Tyson replies, "No, I'm totally broke. I had a lot of fun. It (going broke) just happened. I'm very grateful. I don't deserve to have the wife that I have; I don't deserve the kids that I have, but I do, and I'm very grateful."
Tyson is dad to five children from various relationships, including his 16-month-old daughter, Milan, with Spicer.
His reality show Take on Tyson will air on the Animal Planet channel in early 2011.