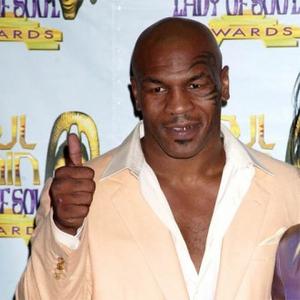 The former heavyweight world champion boxer and his wife, Lakiha Spicer Tyson, welcomed the little boy into the world yesterday (25.01.11) and have now decided on his exotic moniker.

The tot - who weighed in 8lbs 13oz - was born at the St. Rose Dominican Hospital in Henderson, Nevada, and both mother and baby are doing well.

A spokesperson for the couple - who are already parents to two-year-old daughter Milan - said: "Morocco Elijah Tyson arrived January 25 in Henderson, Nevada, weighing in at 8lbs and 13 oz, and measuring 19 inches in length."

The news of Morocco's arrival comes 18 months after the tragic death of Mike's four-year-old daughter Exodus in a horrific accident in 2009 when a chord from a treadmill became wrapped around her neck. Mike and Lakiha, 32, married just 10 days after the ordeal.

Mike has been married twice before, to actress Robin Givens and Monica Turner and has five other children: Rayna, Amir, Mikey, Miguel and D'Mato, from his marriages and by ex-girlfriends.

The 44-year-old retired sportsman - who became the youngest heavyweight champion of all time when he won his first title in 1986 - is thought to have earned over $300 million throughout his in-ring career, but in May last year claimed he was broke but happy with his position in life.