Bradley Cooper Has Been Given A Special Piece Of Boxing Memorabilia From His The Hangover Co-star Mike Tyson - The Sportsman's Very Own World Champion Belt. 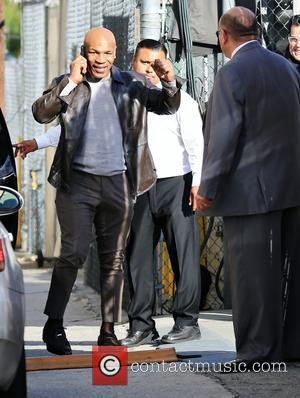 The retired boxer reveals he has become close friends with Cooper since they worked together on the hit 2009 comedy and he recently treated his pal to a unique gift straight from his trophy room - one of the belts he was awarded when he was crowned the World Boxing Council (WBC) heavyweight world champion.

Tyson asked his daughter to deliver the present by hand when she recently checked out Cooper's Broadway play The Elephant Man.

Showing off a photo of the Oscar nominee holding the belt above his head during an interview on U.S. morning show Live with Kelly and Michael on Thursday (12Mar15), Tyson explained he wanted to give the American Sniper actor something really memorable, "because he deserves it".

He added, "Look at what he's accomplished from The Hangover. Look at how far he's come..."