Retired Boxer Mike Tyson Has Warned Fans Over Flyers Which Suggest He Is Hosting A Fight Night Party Ahead Of Saturday's (02may15) Match Between Manny Pacquiao And Floyd Mayweather, Jr. 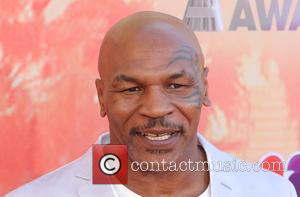 Picture: Mike Tyson - A variety of stars were photographed as they attended the 2nd Annual iHeartRadio Music Awards which were held at the Shrine Auditorium...

The Hangover star took to Twitter.com to distance himself from promotional materials which seemingly advertise a party at Tyson's now derelict former home in Las Vegas.

Tyson is adamant he has no affiliation with the event, which has been billed as a celebration of the boxing match, deemed the "fight of the century".

He writes, "People call the Vegas house I use to live in Tyson Mansion & it's misleading. I moved yrs (sic) ago & never plan on stepping foot in there again. I am NOT hosting a party fight night at 'Mike Tyson Mansion'. If you got a flyer & was misled into thinking I would be there it's not true."