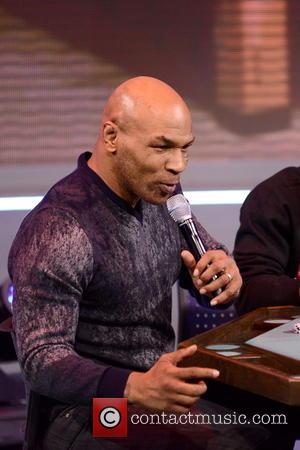 Former boxing champ Mike Tyson has urged women's rights activists to look past his 21-year-old rape conviction and judge him on his changed lifestyle, insisting he was as innocent then as he is now.

Producers of hit Tv crime drama Law & Order: Special Victims Unit recently came under fire from campaigners against sexual violence after they cast Tyson in an episode - the activists launched a petition online calling on show runners to scrap his role due to the 1992 rape crime.

Show creator DICk Wolf spoke out to defend the casting choice last week (ends03Feb13) and defiantly insisted the story line in question, in which Tyson plays a murderer with a murky past, was one of their "strongest episodes in the last five years".

He refused to pull the episode and it aired in the U.S. on Wednesday (06Feb13) - and now Tyson has asked his critics to give him a second chance because he's doing all he can to improve his old bad boy behaviour.

The Hangover star tells U.S. broadcaster Katie Couric, "I was convicted but it wasn't true... Everyone is entitled to an opinion. I may have had a moment in my life where I was violent and did certain things that wasn't appropriate.

"For the last five years I embarked on this very strange monastic type of lifestyle in public, (and) I ask you just to judge me from that alone. This is me changing my life...

"I was not well; I'm just a guy trying to bridge the gaps between who I am and who I wanna be and that takes a whole lot of struggling, a whole lot of soul searching, and maybe a whole bunch of therapy because my objective is to get well and I wanna be well."