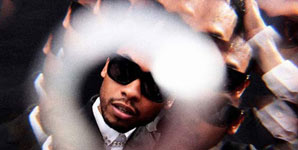 Miguel caught our attention with the sultry All I Want Is You, proving instantly that he was one to watch. The Grammy nominated singer/song writer is back with his sophomore album Kaleidescope Dream. Contactmusic chatted it up, to discover why Miguel has dedicated a track to his kitten.

Miguel - new album, supporting Usher at the iTunes Festival and headlining your own show at the Jazz Café both in London. How excited are you right now?
Absolutely not!

Ok, what is it that you don't like?
(Laughs) Nah, I'm just kidding. I'm excited, I haven't opened for Usher for like two years, so it will be cool to do it again. It will be a pleasure.

UK fans first got to see you live in action last year at the Forum, how do we react to your stage act compared to fans in the States?
I think the audience was a bit less skeptical. Speaking for myself, I tend to be skeptical of artists in general because I want them to kind of prove themselves first, you know? Which is healthy. I don't mind proving myself, but it seemed to be love right off the bat which was a great, great feeling. I really appreciate that and I think the music listener here is more open and excepting. This might have to do with [the fact that] Europe is right there, you have every culture closer, it seems, which I feel makes the listener more cultured and more open which makes a huge difference.

I imagine there is nothing worse than becoming as successful as someone else. In an industry that cares more about a singer's image than their music, how do you manage to stay true to yourself on the new album Kaleidoscope Dreams?
I think it was so much easier because that was the actual driving thought: 'just be true to yourself' on every level this time around. On the first album, when it came to image and so forth, I wasn't making all of the decisions for myself because I was new and inexperienced, or rather more inexperienced than I am now. I was more likely to listen to advice from people who didn't necessarily know me because they had that experience; I just hadn't found that balance. So, in finding that balance, I've found my own way of figuring out where to listen to people and where to go with my gut and, this time around, being myself was at the very core. I executive produced the album, if I didn't produce the song, I co-produce it or I played on the song, I wrote all the songs. I creative directed the album, like the packaging I styled myself. I do have a creative partner but it is all stemming from me, anything creative is coming from me with the driving energy to be true to yourself. Don't let outside influence cloud or sidetrack you. Now, on the business side, that's not my thing. I have partners, my manager, my team that help me make the right decisions on that side but, when it comes to creativity, that's my world.

You made appearances on Fat Joe's Pride N Joy and Nas' Summer On Smash tracks recently, however you have chosen not to have any features on the new album; why?
I still feel like I'm introducing myself for the first time. I think that the music can stand on its own and I don't want to over sell it. I want people to f**k with me because of me and, as much as I am a fan of so many MCs and other musicians, I didn't feel like I needed that now. Next time around, who knows, I'll continue to feature on other songs because I love that.

When you see the track listing, Pussy Is Mine immediately pops out.
I think that's because people love to say pussy (laughs).

What is it about, I'm intrigued?
'Pussy is Mine' is about the reality of being single. When you are single, you have 'friends'; they are people that you sleep with or people that you sleep with and hang out with too but the reality of it is that you are still single. I think, for a man, there is this moment when you want to feel like it is yours, even when you know it is not. It is a very vulnerable place to be as a man because you know that she has other men and she knows you got other women but in that moment, you want to feel like you own it. The song is written from a very vulnerable position 'tell me that it's mine, because I don't want to imagine that anybody else can get this'.

The Art Dealer Chic EPs are fantastic! Was it important to give away free music and connect with listeners in this way before the official release of the new album?
When it came to putting out music, I relied so much on the label or I let the label do its thing and I stopped connecting with my peers and the people who discover music as I do, online, and who aren't listening to the radio or even watching TV as much. They are always online looking at their favorite blog or reading their favorite magazine to notice what the f**k is really going on, you know what I'm saying? I had lost touch with those people, so I wanted to find a way to reconnect and that was my way of engaging my friends, the people that go to the same bars and that listen to the same music. Those that go to the same shows and will be at the same festivals, the people who are like me - I had lost my rapport with the; there was no communication and I didn't exist in their world anymore. Whereas, when I first put Sure Thing out, when MySpace was in the spotlight, it was a big deal online. I was buzzing because of those online fans who look for music in that way. This was a definite way to reconnect, let me just forget about the label, let me just make music for me and the people that love this s**t.

Do you feel social media has become the best way to reach out to your fans?
F**k yeah; I think they are all necessary and useful tools. Look at the people that get the news from Twitter; it's sad but it's true. So, to reach some people, you have to go where they are at, and that's where they are at.

You are also releasing Kaleidoscope Dream: Water Preview and Kaleidoscope Dream: Air Preview for digital sale only, what relevance does the reference to the elements mean?
For some reason, my dreams have all these elements in them, one or the other or a combination. It was important to include it. Kaleidoscope Dream is a metaphor for our life; everyone has their own Kaleidoscope Dream, it is the life that they project and it is the life that they are solidifying with their conscious decision and their subconscious feelings. In that sense, these elements are a part of everyone's lives. In order to drive the point home, I thought this was a great way of connecting the parts of the album; it was a way of making it concise.

Your debut 'All I Want is You' in 2010 was well received; however, the perception of you personally throw up questions about your sexuality. Do you deliberately do things visually to be more understood? In retrospect, I'm really glad that I may have confused people because it allows me the freedom to do whatever the f**k I want and, in actuality, I do whatever the f**k I want from a creative standpoint. At first, it may have seemed, even to me, a negative thing and I did take it negatively that people were always questioning. It was more about me and what it was that I gave off, as that was all people were worried about and were forgetting that the music was there. Once everyone got passed that s**t, it was like 'f**k the music is good, like really good'; well, that's what I've read. I'm not saying that for myself. I will say that I thought the music was good and that's why it was disappointing when people couldn't get passed whatever their initial thought of me was. I never in my life felt the need to try and prove myself for anybody, I've always been who I am and I'm going to be who I am. It was weird defending my sexuality and myself, but I'm happy I went through all of that. It taught me to be more comfortable in myself. So, to answer your question, I don't feel the need to do things visually to make people get it, just for that reason. I do feel the need to do things visually that makes sense with my music.

Do you have an ego?
O-M-G, yeah. Everyone has an ego. I think mine's in check. I think, in that sense, I am misunderstood; you have to have a conversation with me and you'd get that I am really not a cocky person. I have my moments on stage but that's where that belongs. Anyone that has ever met me knows that I'm actually a very chilled and almost unassuming person. I treat every person the same and that's how's it's supposed to be.

R&B beef baffles me. Why did the argument with R&B singer Lloyd really happen, surely it wasn't just about hair?
That's too stupid to even talk about. (Laughs)

Cool. Is there anything that you would like to do in addition to making music?
If I weren't a musician I would be a photographer. I think I would love to spend some time really doing that, however the reality is I probably won't get the time to do that, so I'll always love taking really bad pictures (laughs).

I love the pictures musicians take of the audience while they're on stage; you should do that, you can't go wrong.
I would love to do that but I never remember to do it. I'm gonna try it because people react to the camera, it's cool for memories.