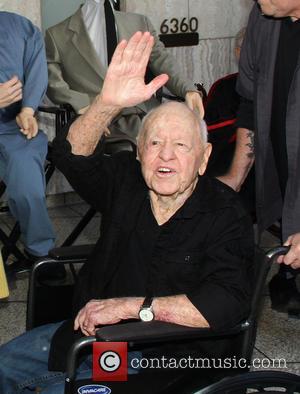 The actor passed away on Sunday (06Apr14). The cause of his death has not been released.

Rooney's career spanned over nine decades. He started acting as a child and accumulated over 300 credits, including the 16 films he made as America's boy next door, Andy Hardy.

In the 1938 film Love Finds Andy Hardy, he starred opposite Judy Garland, who went on to become his frequent co-star. The following year they appeared in the movie musical Babes in Arms, which earned Rooney an Oscar nomination.

He accumulated three more Academy Award nominations for his roles in The Human Comedy (1943), The Bold and the Brave (1956) and The Black Stallion (1979).

His other film credits include A Midsummer Night’s Dream, The Adventures of Huckleberry Finn, National Velvet, Breakfast at Tiffany’s, and Requiem for a Heavyweight.

Rooney also had a number of television appearances over the years, and fronted The Mickey Rooney Show in the 1950s and Mickey in the 1960s.

In 1981, he won his first Emmy Award for his portrayal of a mentally ill man in Tv movie Bill.

He also was handed two honorary Oscars in 1938 and 1983, and also won two Golden Globe Awards.

Rooney was married eight times. His first wife was legendary actress Ava Gardner. He is survived by his last wife Jan.

One of the first tributes posted on Twitter.com on Sunday night (06Apr14) came from Alec Baldwin, who wrote, "An old pal of mine is gone. One of Hollywood's rare gentlemen and a bientot (see you later) to Mickey Rooney."