Mick Jagger and David Bowie ''were really sexually obsessed with each other'' according to a new book by Christopher Andersen. 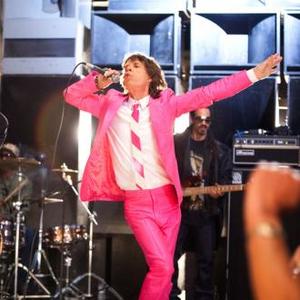 Mick Jagger and David Bowie ''were really sexually obsessed with each other'' according to a new book.

A controversial new biography titled 'Mick: The Wild Life and Mad Genius of Jagger' by Christopher Andersen, claims that the two rockers enjoyed an illicit affair 40 years ago.

The novel reads: ''Ava Cherry, a backup singer who lived with the Bowies for a time, reportedly told a friend that 'Mick and David were really sexually obsessed with each other. Even though I was in bed with them many times, I ended up just watching them have sex'.''

After meeting in 1973, Mick went backstage at one of David's concerts, and things soon turned physical according to the story.

Christopher claims that the fling started to wind down when David's ex-wife Angie Bowie, who was married to David at the time, returned home to find the two men asleep together in her bed.

An excerpt states: ''By October 1973, the Bowies were living on Oakley Street, just a stroll from Cheyne Walk. Angie had been out of town for a few days when she returned home one morning and went straight to the kitchen to make some tea.

''The Bowies' maid, who had arrived about an hour earlier, approached the lady of the house with a peculiar look on her face. 'Someone,' she told Angie, 'is in your bed'.''

It continues: ''Angie went upstairs to her bedroom, slowly pushed the door open, and there they were: Mick Jagger and David Bowie, naked in bed together, sleeping. Both men woke up with a start.