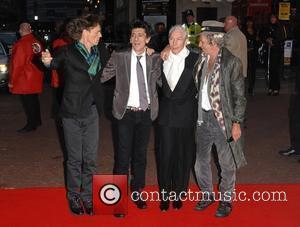 ROLLING STONE SIR Mick Jagger has an auto-cue device onstage to make certain he doesn't forget the lyrics to songs he has been singing for up to 40 years. The veteran rocker, 63, rarely refers to the video screen but has it there as a security measure should he struggle to remember a certain lyric from the band's huge repertoire. An insider says, "Mick's not getting any younger and he doesn't want to slip up. "He's generally running all over the stage but if he gets a memory blank he can get back to the screen quickly. He rarely needs it but it's a back up. "It would be pretty embarrassing to forget the words to a song like (I CAN'T NO) SATISFACTION when you've been singing it for 40 years." And the screen also tells Jagger what city he is in, so he can remember to talk to the audience in its native tongue. The insider adds, "And he likes to address crowds in their language so there's standard patter at points in the show. "When they played at Twickenham the script even said, 'Good evening London'."