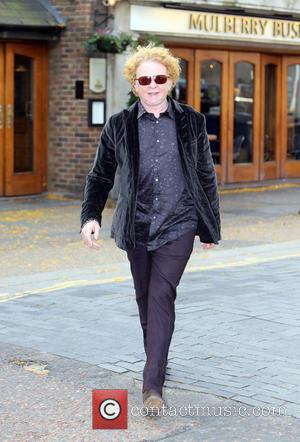 The Holding Back the Years stars disbanded in 2010 but have reformed to record a new album and hit the road this month (Oct15) to mark 30 years since they found fame.

Frontman Mick admits he only agreed to the reunion because he didn't want to be branded "miserable" but he has no intention of touring with the band again until their 40th birthday rolls around.

"That's why I agreed to the tour, effectively," Mick tells U.K. TV show This Morning. "I think it's a miserable so-and-so that doesn't celebrate an anniversary, so I figured this was the thing to do. So I'm committed to go around the world until the end of 2016...

"If it wasn't for the anniversary I wouldn't be doing it, simple as that. But my manager made me aware that it would be the 30th anniversary and he said, 'Don't you think you should do a tour?'... (But) I don't plan to do anything again until the 40th anniversary. I mean, I might do some shows but not a big worldwide tour."

The British band shocked fans with the reunion tour announcement last year (14), posting a message on their website stating: "2015 marks the 30th Anniversary of Simply Red and what bet­ter way to cel­eb­rate than to get the band back on the road!"

The trek was initially a series of shows in Europe but the band has since added dates in Australia, New Zealand, and South America.