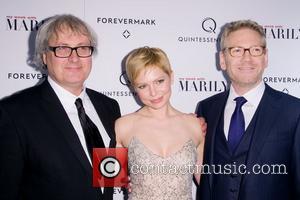 Actress Michelle Williams is considering a return to Dawson's Creek and movie mogul Harvey Weinstein is keen to produce the TV cast reunion.
Williams' character on the beloved TV series, bad girl Jen Lindley, was killed off but she insists she's still open to returning to the drama for a TV movie.
She tells Los Angeles radio DJ Ryan Seacrest, "In a heartbeat I would go back, but I would have to go back as a ghost."
And Weinstein, her producer for new film My Week With Marilyn, insists he'd like to be involved: "I will produce it... It's gonna be a period piece."
Dawson's Creek also featured Katie Holmes, James Van Der Beek and Joshua Jackson.