Michelle Williams had her own opinion on all of the costumes she wore for new movie 'My Week With Marilyn'. 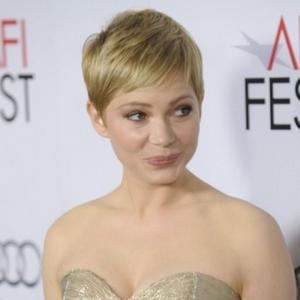 Michelle Williams was involved in choosing the look of her character Marilyn Monroe for new movie 'My Week With Marilyn'.

The actress plays the troubled started in the new movie and costume designer Jill Taylor reveled she was impressed with Michelle's opinion on what she should wear.

She told Vogue.co.uk: "Michelle has this real vulnerable quality to her - she's like a little girl. She's almost fawn-like, a real Bambi. I think that's something she brings to each film she does, but it was especially helpful in 'My Week With Marilyn' because it meant she really understood and captured the essence of the Marilyn we were trying to convey. You work with so many people in film who give you nothing, but that just wasn't the case with Michelle. I'd be round hers late at night to do fittings and she always had an opinion on the costumes."

Jill also revealed she used fashion to represent the "private" of the tragic actress in the film and discovered that Marilyn was ahead of her time when it came to fashion.

She said: "What we wanted to represent was the private side of her. She's known for her show-stopping glamorous gowns, but after studying hundreds of books and photographs we found out that actually Marilyn dressed for comfort. She was ahead of her time in terms of style. The Fifties look was very much based on structuring and tailoring, but she was often chose quite American sporty clothes to wear. She was the Calvin Klein girl before there even was Calvin Klein. In private, she kept to very simple lines and silhouettes."