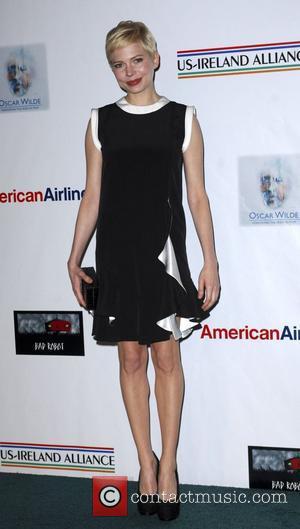 Michelle Williams has been named an 'honorary Irishwoman' at the annual Oscar Wilde Awards. The ceremony celebrates Irish cinema talent but you don't have to hail from the country to receive an award.

The actress won the award for her role in My Week With Marilyn, playing the titular character, Marilyn Monroe. She is the first non-Irish woman to be honoured at the event but is by no means the first non-Irish person; the likes of Paul Rudd and James L Brooks have also won awards.

Williams is also nominated for the same role at the Oscar's this year and she wasn't the only Oscar nominee in attendance - Bridesmaids actress Melissa McCarthy and Hugo screenwriter John Logan were both honoured at the event. The Oscar Wilde awards are held every year before the Academy Awards; this year they were held at Bad Robot; JJ ABRAM's production company.

Logan presented Williams with her award and acknowledged that while she was not Irish, she had the qualities that made a person Irish: '.An incandescent twinkle in the eye, the love of mad poetry and, more than anything, a generosity of spirit.'

Moviecitynews quote the actress as saying: 'I consider it from a land and from a people who are known for poetry, for literature and lore, for myth and legend and in a business that's ultimately about storytelling, I'm honoured to be acknowledged by the original storytellers.'