Michelle Rodriguez: 'I Go Both Ways' 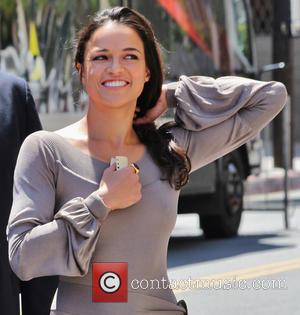 Actress Michelle Rodriguez has opened up about her sexuality, revealing she goes "both ways".

The Fast & The Furious star has kept her love life a secret over the years, insisting she rather make a sex tape than talk about her personal life, but now she has decided to answer questions about her preferences.

She tells Entertainment Weekly magazine, "I don't talk about what I do with my vagina, and they're (the media) all intrigued. I've never walked the carpet with anyone, so they wonder, 'What does she go with her vagina?' Plus, I play a butchy (sic) girl all the time, so they assume I'm a lesbo (lesbian)."

"They're not too far off. I've gone both ways. I do as I please. I am too f**king curious to sit here and not try when I can. Men are intriguing. So are chicks."

After reports suggesting Rodriguez was a lesbian came out in 2009 , she lashed out saying, "If I wanted to tell people what I do with my vagina, I'd have made a sex video a long time ago.

"Largely, people don't know the whole story about anything. But still they need to put a name on it so they can label it and put it on the side and not dedicate any time to figuring it out. It's laziness."

In 2011, after Rodriguez was asked if there were any rumours she wanted to clear up, she stated, "I'm not a lesbian....yeah. Michi (Michelle) likes sausage."